How CERN Had a Mini Big Bang 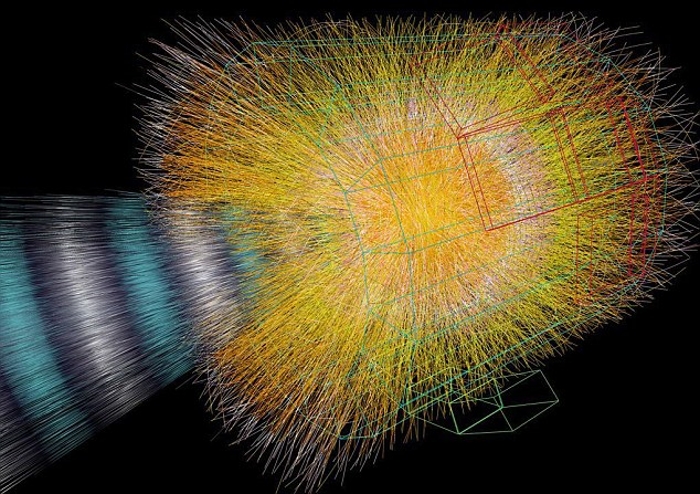 In the scientific quest for the smallest particles in the universe, a gigantic machine known as the Large Hadron Collider (LHC) was built with an $8 billion price tag. The behemoth contraption is located at the physics laboratory of the European Organization for Nuclear Research (CERN) in Geneva, Switzerland and this, one of the world’s most ambitious projects, was launched in an attempt to recreate the Big Bang and produce collisions energetic enough to unlock the mysteries of the Higgs Boson.
The anticipated result of the CERN experiment was to bring about a potentially phenomenal shift in the entire physics model for the universe by enabling high-speed protons moving at opposite directions to smash into each other and shatter into sub-atomic particles. The scientific collaboration intends to prove that the Higgs boson (or the God particle) exists and to explain why matter has mass.
Current physics theory holds that space is infused with an energy field, named Higgs field after the physicist Peter Higgs. According to the theory, some particles having greater interaction with the energy field are slowed down as they travel through space. If the energy field is there, tiny particles should comprise it and the Higgs boson is supposed to be that particle. It’s not the only particle, but just one among many that would explain the laws governing how the universe works.
Initial findings of the CERN experiment mistakenly led scientists to consider the evidence for faster-than-light neutrinos. This would have disproved Einstein’s relativity theory and overthrown the laws of physics in a completely unexpected manner. Neutrinos travelling between CERN in Geneva to the Gran Sasso National Laboratory in Italy clocked in 60 nanoseconds faster than the speed of light.
However, to the science team’s great consternation, the findings were skewed due to a faulty connection in the fibre-optic cable between the GPS unit and the computer. How could such a blunder happen? Even with the best and brightest team of professionals, human error and glitches can creep in. The discrepancy was eventually tracked down to loose cable connection which resulted in inaccurate timing of the atomic clocks, which clarified why the recorded hits were off by 60 nanoseconds. When all this was figured out and the cable connection fixed, the calculations were corrected. Four other experiments conducted have reinforced the theory that the upper limit of neutrino velocity is at the speed of light.
Other setbacks have occurred in the course of CERN’s massive undertaking, such as a previous problem with cable connectors as well. The copper connectors in the LHC could not manage the maximum output and required upgrading to handle the higher power loads. The collider was operating at half of its power for 6 months until the repairs and refitting were complete.
Such a complex equipment as the LHC requires many high-voltage coaxial cable connectors. Technical and mechanical malfunctions are bound to happen with a coaxial cable, cable gland or cable clamp. For example, cable clamps can tighten on cables, halting the process of lowering slices of particle detectors that are major components of the LHC.
For now, scientists accept that neutrinos do not move faster than the speed of light. Further research and experiments are on-going. In July 2012, the CERN science team announced their discovery of a new subatomic particle, supporting the standard model of particle physics. To be more precise, it’s not a discovery but a breakthrough in reproducing the elusive Higgs boson. The laboratory successfully produced the particle that points to what’s out there in the fabric of space-time.
This eureka moment is just a teasing glimpse that will hopefully shed some light into how the universe operates.
Written by: Currently the owner of an A/V store, Richard Soileau has almost two decades of experience with almost every conceivable home cinema, audio and gaming system, from Minidiscs and Laser Discs to NeoGeo’s and rear projection TV’s. His last birthday cake was in the shape of a Fluke-117.

Meet the Load Cell: Why Modern Technology Can Take Your Business to the Next Level