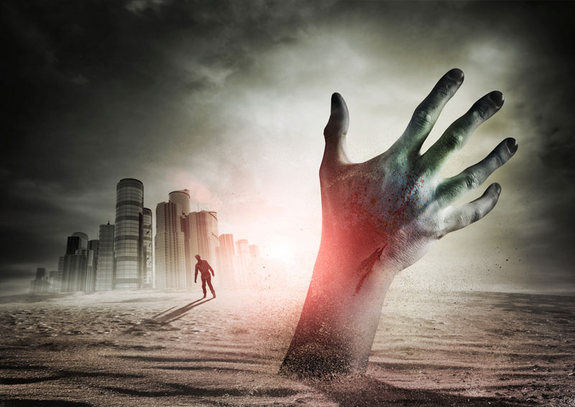 There’s a lot of zombie-tinged entertainment out there right now. On the TV, at the cinema, computer games…It’s as if they (whoever they are) are trying to tell us something. Are they hinting at a future coming our way?

I really hope not. A world populated with zombies lurching around, trying to feast on our brains would be most unpleasant. I know that zombies are really fictional and that they only exist in Haitian folklore, horror films and American mega-series. But what if this suspicion, this paranoia, suddenly became reality? Would any of us know how to cope?

The answer to this question is a resounding ‘No!’ You can’t really prepare for a zombie apocalypse because it’s never happened before in real life. But if it were to occur (don’t worry, it won’t) here are my top tips for survival.

The smart zombie-dodger gets early training in to give them the edge. Attending zombie events where apocalyptic scenarios are played out will help you prepare for the worst. Zombie events held at special venues with a full cast of actors playing dead-eyed flesh eaters on hand to give chase really sharpens you up. Spotting a zombie at fifty yards and dispatching them with the right weapon will fill you with the confidence you need to survive. Oh yes, zombie events are where all the hardcore warriors against un-dead domination earn their battle badges.

Out run the zombies

Zombies used to be really slow and a bit pathetic to tell you the truth, stumbling slowly, arms outstretched, unsteady and unfocused. However, modern day models are far more souped-up and much more difficult to out run. Fuel injected zombies that sprint like Usain Bolt and leap over buildings are becoming the norm, unfortunately. So get down to the gym, start working on your sprint starts and stamina – because as you know, zombies always get up again.

If the zombies were to take over the country (unlikely, as they are fictional) societal breakdown would swiftly follow. That means trips to the supermarket etc. would be rife with danger. Cut down on risky forays into the outside world by laying in lots of stocks at home to keep you going. Tinned foods are best as they don’t perish– don’t forget your tin opener! Lots of bottled water is a good idea as is a full First Aid kit.

Some highly prepared people keep chickens so that they don’t have to forgo their egg for breakfast in the morning. If you can keep the hens safe from zombie marauders it sounds like a great idea. Think about the foods you would really miss if you were denied them, then set about buying extra of these on every supermarket trip. Whether it’s peanut butter, tea bags or Strawberry Schnapps, begin stockpiling now to get you through the dark days.

Other sensible purchases might be a self powered torch and radio to keep up with outside events as they unfold. It is possible you will be on the move, running from zombies, so get yourself a warm sleeping bag and compass.

You can’t reason with a zombie because they have no brain and they are dead. This makes them pretty dangerous opponents so if you are cornered by one be prepared to fight. They will want to take a bite out of you because they are flesh eaters, so keeping them as far away as possible is your best tactic. A baseball bat is a solid and long weapon which could certainly check the progress of an advancing zombie intent on violence. Or a gun or an axe – you get the picture. Tool up with some weaponry that is going to give you a chance against the evil zombie apocalypse as it sweeps through your town.

Let me reassure you, a zombie apocalypse is not going to happen. Even though The Pentagon in the USA has compiled a thirty-one page document detailing the planning that is in place for such a scenario. Yes, really. Zombies exist on our TV screens, at the cinema, in our imaginations, but they are not real. The likelihood of a zombie invasion is on a par with that of a werewolf or vampire crusade through the world –I repeat, not gonna happen.

That said, it’s always nice to feel prepared for the arrival of guests, unwelcome or otherwise – so feel free to get ready for what will never happen…probably.