A female teacher, one Miss Adekemi Faboro was pronounced dead few hours allegedly after a first date with a facebook lover.

Faboro who teaches at a private nursery and primary school, in Ojota died last weekend in Ogba area of Lagos while on a date with her married Facebook lover, Christopher Ezekiel, for the first time. 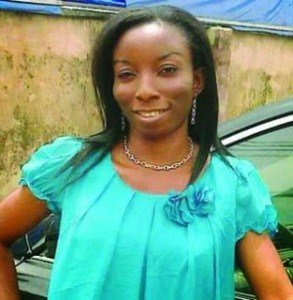 Ezekiel was subsequently arrested by the police at Pen Cinema Police Station while the corpse of Adekemi was deposited at the mortuary for autopsy.

PMNews reports that Ezekiel, a father of two, who happens to be an engineering staff of an electrical company based in Shagamu, came from Ibadan, Oyo State, to visit Adekemi in Lagos State, for the first time on the fateful day, after he met her on Facebook.

Trouble however, started for Ezekiel, when Adekemi started coughing severely at mid night in her home, at 5, Folorunsho Street, off Ajayi Road, Ogba.

And when the situation was getting out of hand, tenants who suspected foul play, rushed her to Ifako General Hospital where she died.

A cause of death reported was still being awaited as at press time.

A few years ago, one Cynthia Osokogwu, the daughter of a retired miliitary officer, was allegedly lured to Lagos by her Facebook lover, drugged, raped and murdered in Festac Town.
Via @PMNEWS

Confession! How We Lured Ladies Into Snake Kingdom – Idah Peterside