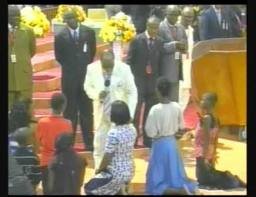 Our ever vigilant and dynamic online press have remained the conscience of the nation so far, especially in these perilous times when Nigeria badly cries for a human representation of the same quality. The shame that Nigeria has become is ever manifested on daily basis and no arm of the decadent edifice has lived up to the broom in the ethical and conscience stake. Our political class remains our ever-abiding albatross whilst our religious leaders actively partake in the growing shame. As someone once said, the name Nigeria has become a shame to behold. No politician in Nigeria today is worth the salt, which is the sad truth. No political party is out to redeem the situation, which is another truth Nigerians have to learn.

If there is any doubt about the latter, a trip to Lagos State where the might of the state is overbearing against the legitimate aspiration of the citizenry in the boiling issue of the Lekki Toll plaza would convince any doubting Thomas. I have the greatest respect for Pastor David Oyedepo. Not as a man of God but as a good specimen of the Nigerian breed. Here is a savvy and suave businessman who knows how to exploit what he has to achieve and consecrate what he desires. Pastor Oyedepo has built a business empire in the name of a religion. He has through good business sense and unparallel sagacity fed the gullible with the much-exploited opium to achieve his material success in life.

He remains the first Nigerian man of the robe to purchase a private jet. He is also the first to start the business of private universities. He is sleek and very intelligent. His worldwide business has his children manning the most viable branches overseas. Of course, I am referring to his church branches. He has ensured that even when he is no longer on the stage, the family business would remain solidly within the family confinement.

With all the firsts this suave businessman has achieved, it was a surprise to watch a video detailing an unknown quality of this so-called man of God.

I had always felt that some pastors were too intelligent to be caught partaking in the shame of witch hunting. I had always felt that Helen Ukpabio remained the empress in this unholy game. Little did I know that even the so-called intelligent ones actively took part in this shameful debacle. It is now clear that the whole of Christendom in Nigeria is built on fallacies, extortion and hoodwinking. The Helen Ukpabio league actually applies to our so-called men of God, the agents of Mormon keeping the people in perpetual bondage and slavery.
The scene was a typical revival or crusade-like environment common amongst Nigerian Pentecostals. Few girls and boys were kneeling down on the stage in front of Pastor Oyedepo surrounded by his army of bodyguards and lieutenants. The video started with a girl who claimed to have come from Imo State. The video went as follows:

Pastor: You have been there for how long?Â  (Question apparently in reference to membership of witchcraft).

Girl: I am not a witch. I am a witch for Jesus. My own witch is for Jesus.

Pastor: (Dumbfounded) you are what?

Girl: I am not a witch. I am a witch for Jesus. My own witch is for Jesus.

Pastor: (Shaking with uncontrolled disbelief and anger) You are a foul devil. Do you know whom you are talking to? Foul devil (this was followed by a very hot slap!!!)

Pastor (continued): Where are you from?

Girl: I am from Imo State. I am not a witch. I am a witch for Jesus.

Pastor: Jesus has no witches. You are a devil. You are not set for deliverance and you are free to go to hell.

Pastor moved on to another girl:
Pastor: When did you get in?

Girl 2: I am not a witch but I used to dream that I was with them.

Pastor: Every one of you on this front that speaks a lie, you are cut down. Cut down…

Apart from the comical nature of the whole scenario, which in the words of the late Fela Anikulapo-Kuti, became a â€œrofo-rofoâ€ argument â€“ â€œI no be witch, you be witch!â€ the serious aspect calls for deep introspection. The definitive stance of Nigerian Pentecostalism in ensuring that the congregation admits to a label in order to facilitate the superiority and the power of the clergy calls for a deep review. The serious social implication of being labelled a witch is unimaginable. The stigma is one that pervades every aspect of the victimâ€™s existence, leading to social and economic stigmatization and rejection, deteriorating quality of life, unimaginable vulnerabilities, including the possibility of being killed by a befuddled but outraged society. I was thinking that Pastor David Oyedepo was too suave and sophisticated to be caught in this age-old cheap Christianity stuff, albeit Helen Ukpabio style. Here again, I was proven wrong.

The proprietary or otherwise of ensuring that witches on earth are eliminated for Jesus is beyond me as I am not and has never been a student of theology. Nevertheless, daily knowledge of the Bible and common sense indicates that the whole purpose of Jesus mission on earth was to preach the good news based on love and forgiveness. He did not say based on violence, especially assault. Also, I vividly remember a part of the Holy Bible that states thus: â€œJudge not, and ye shall not be judgedâ€ (Matthew 7:1 and Luke 6:37). What came out of the brief video was a case of criminal assault on the part of Pastor David Oyedepo. Here was a poor defenceless girl, who was obviously trying to pass a message that was lost in the ambiguities of semantics to a pastor who was either too impatient or too naive to understand what she was trying to say. What she got in return was an unprovoked assault.

The question is must everyone who kneels down in front of a pastor admits to being a witch even if he/she is convinced that she is not? What message was the poor girl trying to pass to the ignorant pastor? Would it have served a better purpose if the pastor had asked the girl for an explanation of what she meant by her unusual statement? Why did the pastor assault the poor girl? Is this case for the Nigerian Police to look into? Every human being has the fundamental right to freedom of religious practice and expression. If it must be stressed very hard here, witchcraft inclusive (if there was ever anything of such). The poor girl from Imo State defiantly stood her ground despite the intimidating presence of Pastor Oyedepo and his unprovoked assault. The story would perhaps have been different if she had admitted to being a witch who meets with colleagues at a defined coven.

Then Pastor Oyedepo would have been happy and the mesmerized congregation would have erupted with abundant shouts of Halleluyah. But the girl from Imo was determined to spoil the show for our garrulous pastor and she got what she did not bargained for, a very hot slap! Even a member of Pastor Oyedepoâ€™s staff was aghast. Please watch the video and see the gentlemanâ€™s reaction. His jaw dropped open when the pastor was putting up the show of shame â€“ slapping the poor little girl.

Instances as the type demonstrated by Pastor Oyedepo, would in other climes lead to a very urgent government regulation of the conduct and proceedings of so-called faith revivals or crusades. It would also have led to instant arrest and prosecution of this ignorant pastor. The essence of ensuring that no citizen is harassed or molested in the expression of faith or religious belief would be rigorously pursued and protected. This, unfortunately, is not the case with Nigeria. Nigerian pastors behave as if they are Gods or something very close. They behave as if they are above the law. They show contempt and disrespect to their congregation. The only affection is for the currency that rolls out of the congregation pockets.

The Nigerian populace, on its part, has shown an alarming tolerance and unbelievable stupidity in the face of this perfidy. We have continued to clap where we should have frowned at the frivolousness and debased behaviour of the impostors who have mortgaged our collective spirituality.

Pastor David Oyedepo needs to be told in clear terms that he went beyond the confines of civilized behaviour and the etiquettes required of someone occupying his type of office. If there was something he shamelessly committed in that barbaric piece, it was nothing but assault. The poor girl from Imo State deserves an unreserved apology from the powerful and rich Pastor David Oyedepo. Again, I anxiously await the response of the Nigerian community to this video of shame. I await, most especially, the response of our extensive Human Rights community and the legion of non-governmental organisations committed to protecting the rights of Nigerian females. Here is a poor and defenceless girl who was assaulted by a rich and powerful pastor. Her case calls for urgent support to pass home the message of civility even in the conduct of religious programmes. It is either Pastor Oyedepo apologises or is taken to court. There seems to be no other option.

The truth needs to be told that Nigerian Pastors are not Gods. They are mere mortals plainly benefitting from the stupidity of the mesmerized populace. They are charlatans and sycophants who are benefitting immensely from the ignorance of the masses. While we stupidly follow some smart crooks wearing the toga of pastors, the larger world has left us behind, making stupendous progress in the field of science and technology. We boast of the highest number of churches per streets in the world, our social and moral fabrics remain in tatters. Our crime record is monumental while social instability and insecurity remain our abiding bed fellows. The Nigerian socio-political terrace remains a mess, our political leadership tottering from unforgivable indecision to unbelievable corruption whilst promulgation of anti-people policies remains the order of the day. The name Nigerian is not an enamoured piece.

The constitutional role of the Nigeria Police Force comes into play in this debased scenario. A moribund organization mired in endemic corruption and stagnated by lack of efficiency and good will.Â  Naturally, I expected the police to have swung into action unprompted. Video evidences are credible evidences as have been demonstrated in more civilized countries. No doubt, the Nigeria Police do not see anything wrong in the video under discourse.

Even if something had been wrong, the personality involved would have created a hindrance. The Nigeria Police Force needs to remove itself from its self-imposed shackles and be more responsive to its responsibilities. A Nigerian citizen has just been assaulted and urgent action is required.

While boiling with indignation on the injustices inherent in this video of shame, once again, from a member of the discredited Nigerian Pentecostal fold, I hasten to add that ultimate justice is in the hands of God, and of course, in that of the Nigerian people. We shall make of our country and of our society whatever we desired it to be. Over to fellow Nigerians!

How Governors, Ministers Stopped President Jonathan from Backing Down