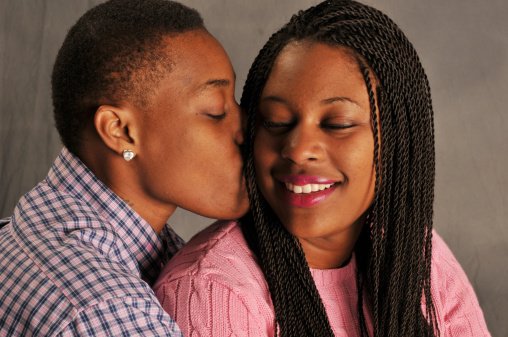 The end times are finally here. Some of the things we used to say can never happen in Nigeria are beginning to unfold and unfurl before our very eyes. And the latest is the marriage between two l*sbians! Yes, two ladies just got married in this country.

The ‘groom’ is an actress. Pretty and fair skinned, well built and always behaving like a man, alphabet M begins her first name. From the South South, We investigation uncovered that she has been a l*sbian all her life. “Oh, she didn’t just start now. She’s been into the act for like almost all her life.

From secondary to university, we all knew her to be one. The only shocking thing is this one they said she just wedded a follow l*sbian. And you won’t believe this: She is a married woman o! But Lesbi has obviously entered her blood. Only God knows whether her husband still touches her. These small-small girls who are her partners practically live in her house.

She tells her husband that they are her colleagues, who have accommodation problem. But it is a big fat lie. The man, maybe, would have protested or even kicked them out since. But being that he is currently out of job and now depends on her to do practically everything, there’s almost nothing he could do”.

The unusual wedding took place at the pool side of a popular hotel in Ogudu, Lagos. And in attendance were said to be other known l*sbians like Sola, Rita, Elizabeth, Bunmi, Victoria and Sandra.

Commenting on the significance of the wedding, a source told US, that all other l*sbians will henceforth steer clear of the ‘couple’. “You know that lesbians are usually very jealous. So, with this wedding, the other members of their club will now leave them alone. Although they could still tango with whoever they fancy, among their other members. But certainly not these two. Like fidelity is preached and expected in marriage, that is also what is expected here. No more ‘cutting shows’ outside. No more sleeping with multiple partners. Both of them must stick to themselves and no one else”.

We gathered that an elderly member of the group, also married and who resides in Dolphin Estate, Ikoyi, Lagos, pronounced them ‘husband and wife’. And thereafter massive fun commenced. With food and drinks in excess. The bride, lest we forget, is young, very pretty and also fair-complexioned.

An undergraduate of one of the South South universities which has produced so many popular actors, her first name is Linda. It would also be recalled that this is not the first time that a strange marriage like this is taking place in the world among Nigerians.

Years back, a beauty enhancer from Edo State who is very, very popular, was ‘married’ to the daughter of our erstwhile Chief of Army Staff. Both unabashed lesbians, their names are Dupe and Aisha. And at that time, it generated so much furore, even though the venue was abroad, before eventually dying down. And now this – which is the first in our country.Happy married life to them!.

Photo: Bride to-be Jumps to her Death from Speeding Bus in Lagos