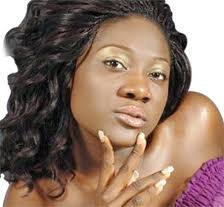 In the last few weeks, nothing has dominated discussions in the entertainment industry like the wedding plans of controversial screen diva, Mercy Johnson.

The wedding which has been earlier overshadowed by rumours that it has been called-off will be holding on August 27.

In a recent interview, Mercy Johnson’s mother opens up about the husband snatching scandal.

Excerpts from the interview;

Yes I am. Mrs Elizabeth Johnson, mother of Mercy Johnson.

What are your plans towards her marriage amidst these controversies?

I don’t have any plans now, God is our town planner, I put my trust in Him. He is the one that raised her to where she is today, before she met Odi God was aware, everything happening today are not unknown to Him. My belief is that if God assigns Odi of which I know He has done for her, as a husband, the gate of hell can’t prevail over it. God that made their paths cross know their future, present and past, whosoever stands anywhere looking for the downfall of the innocent girl will face the battle of God.

Madam, did Odi inform you he was married as is generally reported in the media?

Odi isn’t married, he told our family, that when he got to Italy, the lady was his girlfriend and she bore him a child, later, Lovely met a guy and followed him to Canada and she bore him that boy, the woman herself confirmed it. We are not aware of other things because Odi has said the truth and when we asked him how long they separated, he said for the past 5 years. Let us say the truth and let the devil be ashamed. I have told my daughter to let the will of God be done in her life. As for rumour mongers saying Mercy has scattered her home, she is the one who scattered her home because if she loves Odi she wouldn’t have followed another man and even giving him a child, the man is late now, so they want to set my innocent daughter up and spoil her day of joy and I know God will never agree with them.

Why do you think this is a planned work to disrupt Mercy’s wedding?

There are people who watch you without you knowing, out of all the children I have, Mercy is unique, I can never deny her anytime any day, she is gifted and God has used her to bring the family up, so if anybody is stepping on my joy, he or she will face the wrath of God cos one stupid person who claims to be a man of God said in the newspapers that if her mother is reasonable enough she will make her cancel the wedding. The man is not a born-again cos if he is and isn’t deaf and blind, he would have asked how a woman who left her husband five years ago now shows up threatening with fire and brimstone, this definitely is a set up but as many as run their mouths against the Johnson’s family will face the wrath of God because we are innocent.

Did you have any inkling at her inception or birth that she would be this famous?

No, we are Christians in our family, we hand our children to God and after that it is sealed up. It is God who made her what she is today, when she was young, she used to play and make a lot of people laugh, she is very free, that made us to know that she had a brighter future ahead, she was the head girl in secondary school, she always come first in sports, dress rehearsals so I see no reason why she shouldn’t excel in her career. No evil hands or thought against Mercy can work; nobody can overcome her I Jesus name. (Father cuts in) I have been reading stories tarnishing our image, imagine somebody wrote that I said I have cancelled the wedding, when did I say so? We should have the fear of God in whatever we do. Like this Lovely of a person, if she is actually the wife of Odi and my daughter is struggling to take her away from her marriage, I will pray to God and tell my daughter not to go into another person’s home but the truth is my daughter knew Odi in 2009, if Odi is so important to her why must she leave him for another man; now, she wants to come back saying somebody is snatching her husband from her, I can phone Odi’s father and they will tell you they don’t even know her.

There was also a report that Mercy has run away from home?

How can they say she has run away from home, I saw her this morning, we were together.

Madam, are you saying the wedding is still going on as planned?

God is a God of plans, He will bring out everything perfectly, we depend and look up to Him, we have put everything into his hands and nobody can change the plan of God

What would the party be like, is it going to be church affair or with some traditional touches?

In our area, we do traditional, court and church weddings. I did the three when I was getting married to her father; it is the same pattern that we will follow.

You don’t attend the same church with mercy?

No we don’t, we attend Pentecostal church, Mercy and her elder sister used to go to The Redeemed Christian of God before she started attending the Christ Embassy

What are her church plans for the wedding?

I don’t have anything to do with the church cos we don’t attend Christ Embassy; all I know is that God says her marriage will stand. Mercy is not the first person people will plan evil against. Our God is a God of battle. She has never soiled her hands in anything devilish. Many people mistaken her ole in movies to be her person, she has been given different names, some say she wants to marry because she is pregnant, I asked her if she was pregnant and she said she was in her period that she was going to show me.

So by your words, the wedding is going as planned?

By the grace of God, with all the powers of God. I Elizabeth , I say nothing though I have nobody to assist me, I have God, nothing will stop my daughter’s wedding. Let this be a lesson for every woman who doesn’t want their husbands to be their husbands. If you don’t respect what you have when you lose it you will be crying for nothing because she lost her husband and Mercy took over, so nothing can happen. She has lost her husband, Mercy has taken over, let her go and die.

Amy Winehouse Toxicology Results Released No Drugs Found in Her