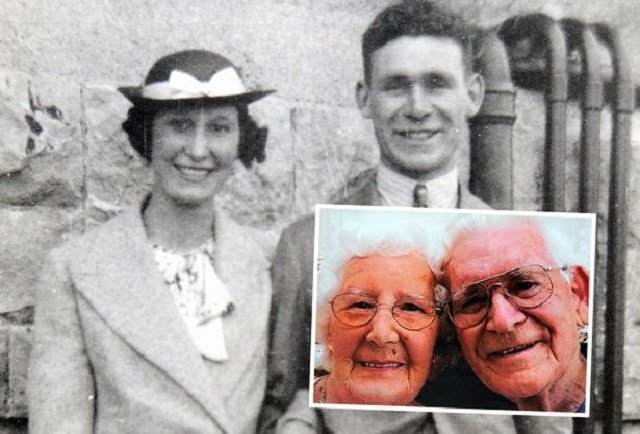 Marjorie Hartland died just 14 hours after her husband and former prisoner of war, Clifford, 76 years to the day after they got married. By Georgia Arlott

They were inseparable in life for 76 years… and died within hours of each other.

Clifford Hartland passed away on July 29 at the age of 101 and his adoring 97-year-old wife Marjorie followed him 14 hours later – on their wedding anniversary.

Their daughter Christine said her mum had ‘’died of a broken heart’’.

But not only do they have an incredible love story, but an incredible story of survival in brutal conditions during World War Two,

The couple met in Cardiff before the war. It was love at first sight and the happy couple married in 1939.

But their love story was soon dealt a blow when Clifford, a gunner in the 7th Coast Regiment Royal Artillery, was sent to Singapore on October 1, 1941.

When his regiment surrendered to the Japanese in 1942, Clifford was among the thousands of prisoners of war who were forced to build the infamous Thailand-Burma railway line.

Conditions were brutal, and 13,000 prisoners died and were buried along the route.

A strapping, 11-stone young man when he left Liverpool Dock, Clifford weighed a pitiful five stone when he returned, one of only four survivors from his regiment.

Clifford and Marjorie’s daughter Christine, 67, said: “I don’t know how Dad survived – mainly luck and determination, I think. There were 700 men in his regiment when they went out, but only four ever came back. Dad was the last to die from his regiment.

“In 1942, Mum got a letter from the Colonel of the Coast Regiment saying Dad was missing, presumed dead. She had the papers to claim a widow’s pension.

“She absolutely refused to believe it. At the time, she was conscripted to work in a parachute factory in Cardiff Bay. She hated it – it was dirty and rat infested.

“But every day, on her way to work, Mum would go into the church she passed and pray that Dad would come home. She lived without him for four years, but she never believed he was dead.”

Clifford had been mercilessly tortured, starved, and worked to the brink of death by the Japanese. He was forced to trek for miles each day through leech-filled swamps.

Christine – a mum of two – related how her father had once been caught smoking banana leaves in one of the 15 prison camps he had been sent to.

The Japanese officer who discovered him pushed a poisoned bamboo shoot through his leg, leaving a lifelong scar.

Last year, Clifford told the Coventry Telegraph: “The worst thing was when we had to dig our own graves. We were due to be shot on the day the war ended.

“Then the ‘all-clear’ sounded. You can guess how I felt.”

Clifford came home to a street party in Cardiff, and even a letter of thanks from the King. But his wife’s welcome was the most treasured of all.

The war hero was discharged from the army in 1945, and Christine – the couple’s only child – was born a year later.

Christine said: “Dad was in hospital for a while after he came back from Burma, but neither of them cared. They were just so happy to be together again.

“They had an incredible marriage. They never, ever argued. Dad idolised Mum, and she adored him.

“When they’d go to a restaurant, Dad would eat the same thing that Mum ordered.

“They loved dancing together, and they loved singing, too. Dad had been a choirboy at Gloucester Cathedral.”

The couple later moved to Coventry, where they spent most of their married life, Clifford worked for Morris Engines and they raised a family.

Last Tuesday, a frail Clifford passed away at a rest home, hours after his wife was discharged from hospital with a broken leg.

Christine said: “We think he was waiting for her to come back to the room they shared before he died.

“Afterwards, Mum just kept saying ‘I can’t live without him’. That night, Mum rang me.

“She was upset and I told her to think about all the happy times they’d shared in their marriage while she drifted off to sleep.

“She died at 1am, and I like to think that’s exactly what she was doing. It’s a perfect love story. I’m devastated they’re gone but so happy for them – they’ve never really had to live without one another.

“The undertaker said he had never seen anything like it, when he came to collect Mum. Paramedics said she died of a heart attack – literally of a broken heart.

The Benefits Of Not Having A Boyfriend Or Girlfriend