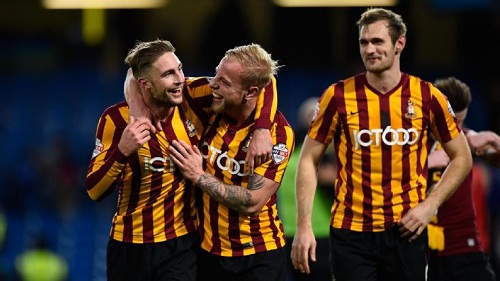 For the very first time since 1927, Reading was able to book a place in Semi Final of the FA Cup. The team had a comprehensive win over strong opponents Bradford City with a 3-0 score. Next month, Steve Clarke’s strong side will go to the Wembley to play against Arsenal. Bradford City was experiencing an excellent Cup run until two quick goals from Garath McCleary and Hal Robson sent them home. Jamie Mackie scored a third and final goal after the break to put the final nail in the coffin. The memorable adventure of the Bantams’ came to a sudden halt.

This FA Cup season, Phil Parkinson’s side has been in the headlines for only right reasons. On three different occasions, it knocked out higher ranked teams. In the FA Cup’s Third Round, Millwall were defeated, and there’s hardly anyone who would forget Chelsea being sent on their way after losing to Bradford City 4-2. In the FA Cup’s Fifth Round, Sunderland was the next one defeated at Valley Parade.

The fans from West Yorkshire were vocal and impressive. At every moment of the match, they were backing the Bantams. However, the Bantams were facing a team that gave them the kind of play they deserved. They were simply outplayed. Within ten minutes of the match, the high tempo start from Reading caught Bradford off-guard. Two goals were quickly scored, and the visitors didn’t have much time to grasp they were already behind.

The first one to put Bradford City on the backfoot was Mackie. He came fast with a sprint from the left, and won a corner. McCleary swung the ball over, and Robson Kanu was able to find some space for a couple of seconds to hit a header right past Ben Williams. Reading gained momentum, and within the next three minutes, doubled the advantage. Bradford City was left stunned.

The second goal came from the far right side. McCleary first teased James Meredith, and cut inside with his left foot. The power shot took a minor deflection off Central Defender Rory McArdle, and looped over Ben Williams. The Madejski Stadium erupted instantly. Jon Stead and James Hanson caused a lot of concern for Reading. Finally, Bradford City was given a chance to strengthen their hold on the game.

However, Reading had creative players like Billy Knott and Filipe Morais. Therefore, Bradford City started using a straightforward approach to tackle the defense. But their efforts were in vain. In fact, Reading could have scored a third goal at half-time. McCleary was quite close to repeating his 1st goal. This time, he was able to beat Andy Halliday using the same trick. However, he kicked the ball over the bar.

Bradford City showed some good signs of a comeback before the break. However, Federici made a low, smart save to stop an angled shot from Knott. The team had earlier came back from a similar spot against Chelsea. Bradford City won the match from a halftime deficit. Thus, there was still some hope among the fans. When the teams came out for the second half, fans cheered with the same zeal and excitement.

It’s worth mentioning that Bradford City’s approach remained quite similar to the first half. The team made sure Reading had to battle and fight for every ball. Though the team had taken a strong fight from the other end, it wasn’t ready to give up. However, just after the one hour mark, Bradford’s challenge was turned even more difficult. Morais was given a Red card for an aggressive challenge on Nathaniel Chalobah.

On-loan star from Chelsea, Chalobah, was able to take revenge in the very best manner possible. He dusted himself down after what seemed a lengthy treatment, and slipped a pass to Mackie running at the other end. Mackie made absolutely no mistake, and simply blasted a straight blow past Ben Williams to seal the fortune for Reading. For Bradford City’s FA Cup adventure, it was a bad way to come to an end. However, it created an excellent opportunity for Reading, who will be looking to create their own history.

Overall, the match was great, and Reading had never looked better. Defeating Bradford City would definitely give a boost to the team’s momentum. Going into the Final, it would look strong, and there’s no doubt it would give tough competition to the opponents. The star players from the previous game will play an important role. The FA Cup Final will be exciting, and you shouldn’t miss it. Get FA Cup final tickets now.

In this article:Bradford City, Semi Finals, Sport
Up Next:

Man Sentenced To Death For Stealing Handset In Delta