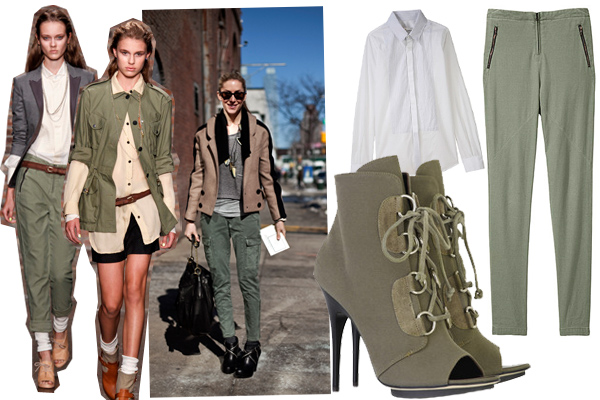 Irrespective of your location around the globe you will find that military like dress is worn by many civilians. So, you are very right when you say that the military style has an great impact on fashion.Whether it is difficult terrain, weather diversities, or style of living, over the centuries military uniform has been an attraction for the people.

These are a few changing fashion styles or piece of clothes from military uniform that has been adopted by non-military persons or civilians:

Being the color of security forces, the khaki has been adopted by many organizations as color of uniform. Following this, the it has been endorsed by fashion designers and others in the industry. Now a khaki is a common color worn by even auto drivers too.

Initially Ray-Ban goggles were used by pilots in order to overcome altitude sickness and glaring effect of the sun. But now a days, you find that it is part of normal wear for many people. Added with look it gives you protection from scorching sun rays and protects your eyes.

The British style of the trench coat has been adopted by many in the fashion industry. It roots back to Crimean war when these coats were issued to military officers. It is having waterproof wool which can be useful in winter as well as in rainy season too.

The first adopted by French fishermen and British Isles in the 17th century to withstand adverse weather, the cardigan sweaters are part of many fashion stylists today. You will find many people wearing it at all ocassions.

If you compare the all the outfits of military that is used by civilians, the camouflage will get the highest ranking. Almost all classes and all strata of people use this sort of military dress in one form or the other.

Traditionally worn by Dutch soldiers of naval power, the pea coats are aesthetically pleasing. At the same time these are warm and durable. This is the reason, it has be copied and modified by fashion designers and these are part many outfits.

Initially used for low speed aircraft pilots, these are most desired part of fashion trends. It provides good protection from cold waves in winter season.

Starting as a part of the U.S. Naval uniform, the white T-shirts are now worn by even school children, medical professional and the list is uncountable. It gives smart look and at the same an indication of high quality standard.

In this article:Fashion, military outfits, trend
Up Next:

Why Your Hair Stylist Is Better Than Your Therapist?