Awadhi cuisine originates in the city of Lucknow, the capital of Uttar Pradesh in the north of India. A rich and varied culinary tradition, Awadhi cooking is typified by elaborate meat and vegetable dishes, heavy on gravies and flavoured with decadent spices. This cuisine draws considerably from the experimental and opulent style favoured in the Mughal kitchen, with an emphasis on luxurious recipes that focus on sumptuous tastes and maximum flavour.

Slow-cooking in the style known as ‘dum’ is a favoured technique of Awadhi cuisine as is the marinating of meats – both techniques do wonders for sealing in juices and guaranteeing a succulent, tender texture that will get carnivores drooling with anticipation. In fact, catering for the meat-eating crowd is a particular speciality of Awadhi cuisine with the use of time-honoured techniques that date back to the royal maharaja kitchens, enabling cooks to produce delectable dishes dripping with flavour in the present day.

Kebabs are a signature dish of Awadhi cuisine and should you visit the city of Lucknow it would be a crime not to sample these tender specialities. The preferred cooking method of Awadhi is to grill the meat on a chula as opposed to baking in the tandoor – the favoured method in the Punjab. This infuses the meat with a smoky, barbecued flavour. 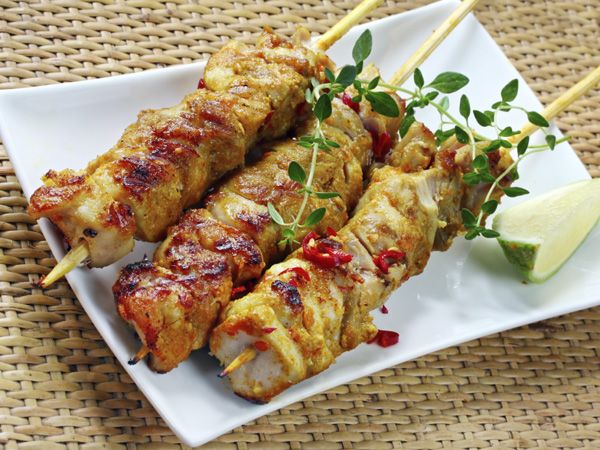 The Best of the Kebabs

A traditional, ceremonial dining feast called a dastarkhwan is an integral part of Awadhi culture and the seekh kebab is one of the stars of the spread. A Mughal delicacy, these kebabs are prepared using minced beef shaped into long sausages and threaded onto skewers. The meat is then slowly cooked over a flickering charcoal fire. A variation of this recipe uses lamb, a popular choice due to its tender texture.

Another common dish is the kakori kebab. Generally, this recipe involves mutton, khoya, white pepper and a variety of Indian spices. The shami kebab employs the adddition of chopped onion, coriander and spicy, green chillies for a bit of a kick. These kebabs are formed into little patties, similar to hamburger patties but stuffed with a tangy and spiced mango filling.

The pasanda kebab involves sliced, marinated lamb, sauteed with ginger, garlic and various spices, ideal for serving with Indian flat-bread, whereas the boti kebab utilises a thick, creamy yoghurt marinade before the meat is skewered and more often than not, cooked in the tandoor oven.

There are also some delicious vegetarian options in the world of kebabs. The kathal ke kebab, an imaginative and interesting meal based around the use of raw jackfruits. The jackfruit is known for its meaty texture and is even known as the ‘vegetarian mutton’. Arbi ke kabab uses a type of root vegetable which makes a tender and juicy treat when coated well in spices before cooking. The jimikand ke kebab is a variation of this recipe but uses the jimikand or Indian yam as the main ingredient. Rajma galoti kebab uses red kidney beans as its main ingredient as well as generous amounts of cumin, coriander, cinnamon, star anise, cloves and all the other usual spicy suspects.

Try out the selection of grilled dishes at Amaya, one of London’s best Indian fine dining restaurants and watch the chefs work their magic with the theatrical open kitchen grill.

In this article:best Indian fine dining restaurants
Up Next:

10 Tips To Bake A Perfect Cake

Why Professional Rack Ovens are So Popular