Jim Carrey Ex-Girlfriend, Cathriona Found Dead In Suspected Suicide After Breaking Up With Him A 2nd Time 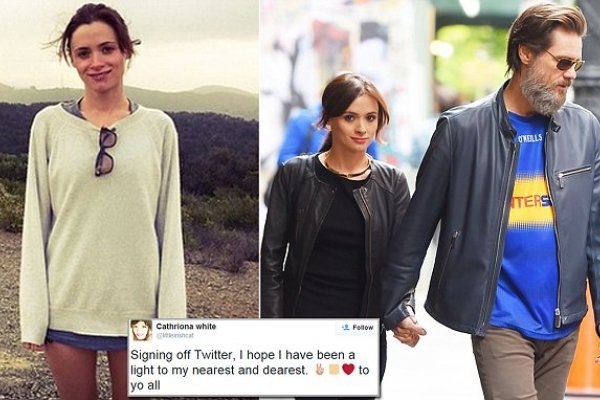 Make-up artist Cathriona White, 28, (pictured, left, with Carrey) was found dead just days after breaking up with the comedian for a second time. In an e-mail to a family friend, her mother Brigid (pictured, far left in top right image) spoke of her heartbreak, saying: ‘My Cathriona is dead. My Cathriona is dead. Can you believe it? What am I going to do?’

Cathriona, originally from the small town of Cappawhite in Ireland’s County Tipperary, was found at her Los Angeles, California, home on Monday night after two friends went to check in on her at the $1.1million residence (bottom right).

White allegedly left behind a suicide note in which she mentioned breaking up with Carrey on September 24. That’s the same day that she wrote a worrying message on Twitter.

While the death is believed to be a suicide, an official ruling has not yet been made.

Following news of her death, Carrey issued a statement saying he is ‘shocked and deeply saddened by the passing of my sweet Cathriona’.

He continued: ‘She was a truly kind and delicate Irish flower, too sensitive for this soil, to whom loving and being loved was all that sparkled.

‘My heart goes out to her family and friends and to everyone who loved and cared about her. We have all been hit with a lightning bolt,’ he said.

10 Things Your Pet Name Says About Your Relationship