I Slept with him, now he’s ignoring me - What do I do? 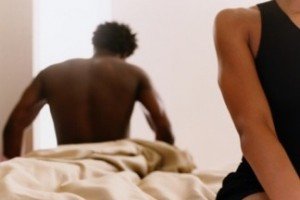 I meet a lot of guys but canâ€™t ever keep them. I am very sexual and I feel like I may put out too fast. Most guys want that, but then thatâ€™s all they want. Can u sleep with a guy too quick and still squeeze a relationship out of it?

Well, I met this guy, â€œDerek,â€ and we went out and had a great time. I mean, he painted my toes, we shopped, watched a movie, and had a drink. You know, just chilling. That night I went home with a kiss and thatâ€™s it. I can tell he wanted more, but we left it at that and I felt good.

Over the next couple of days I didnâ€™t hear from him, so I called Derek and he invited me over and I went. We laid in the bed and, you know, he tried touching me, but I stopped him. He got mad and I told him that I liked him and I didnâ€™t want to move too fast. Derek made it seem like I was making it worse by not sleeping with him, so I did. Silly me, I know. And you know what, he still doesnâ€™t call.

I finally talked to Derek and he says that he hopes Iâ€™m not the type of sensitive chick who wants to hear from the person sheâ€™s dating every day. Derek also said that he doesnâ€™t hope I think heâ€™s cheating because he doesnâ€™t answer the phone. He said he can go days without hearing from me and be cool with that. However, that bothers me.

When I first met Derek he told me when he takes a girl out he likes for them to dress a certain way because he likes to dress himself. So, I dressed my ass off for our date and we go to a restaurant that looks almost like Mama-put. Iâ€™m like, â€˜What the hell!â€™

I try to play it off and not call him because Derek says he doesnâ€™t have to talk to me every day, but why wonâ€™t he call me? Should I move on? I just want a cool dude to kick it with but he is complicated. I feel like I mess up every relationship. When we do get together we have fun. Should I just close my mouth and not be too emotional? â€“ Where To Go From Here

4 Things Every Woman Must Know About Man

How Do I Get Over a Break Up If She My First Love?